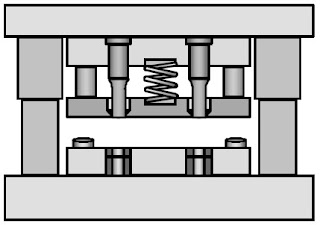 Types and characteristics of tool steels
Steel materials used to make the dies also called tool steel is used for cutting steel, slide or shape material. They may be either carbon or alloy steel. Steel in the low carbon content (0.7 to 0.9%) was used for equipment subject to shock, and high carbon steel tools of content (from 1.1 to 1.3%) was used to make tools with sharp cutting edges.
Steel tool to be hard, strong and resistant to wear and shock. The depth of the hard layer in the tool steel is different in terms of applications, such as an important tool to harden the surface to pull and press forming while the tool is subject to severe shock loading and will need a whole piece of steel that will harden. Each of deformation after heat treatment should be minimal.
Carbon steel tool
Carbon steel, tool steel material can be described as basic tools. It is divided into seven classes according to the carbon content with one class having the highest carbon content. Carbon steel tool has several special features below:
* Violence – In general, carbon steel tool requires only cooling water in the process of tempering. Although water cooling is effective, results in the non-uniform hardness of the steel surface due to air bubbles during water cooling. A very good cooling effect also causes the difference in hardness between the steel surface and the interior. As the hardening heat treatment process to involve a relatively low carbon steel and tempering temperature, exposed to strong heat would have died during operations on carbon steel subject to repeated heat treatment resulted in lower hardness.
* Resistance wear – high wear resistance
* The deformation after heat treatment – quenching with water causing a large deformation and cracking even after heat treatment.
carbon steel, * Toughness – Hardened and mad hard but brittle. As part of a thick carbon steel is usually used as material for the press die, the structure is relatively difficult to roll. Hardened carbon steel is brittle because the carbon in the steel does not react with iron to form iron carbide, but remains as free carbon in the crystal structure.